What Fish Should You Be Eating Now for Flavor, Health, and the Environment?

By
Anne Dolce
When it comes to eating more seafood, the right choices make all of the difference
Thinkstock/iStockphoto

What fish you should be eating for flavor, health, and the environment all depends on now.

We’re always hearing that we should be eating more fish. Whether it’s from our doctor, from a friend in the culinary industry, or from some extreme pescetarian who hates on the consumption of meat because of its effects on the environment, we’re constantly being told that fish is a better cooking, and dining, option.

It’s true, too. The health benefits of eating fish are undeniable, whether it’s battling diseases or getting a huge dose of nutrients like protein, calcium, or vitamin B12. And when bought fresh and cooked right, fish is delicious, and it’s a great choice for cooking because most kinds have a mild enough taste to pair them with any type of foods or flavors. Last but not least, even meat eaters can admit that the production of beef in this country does not lend itself to a good outlook for the environment, so why not order salmon over steak one night?

Click here to see 10 Fish You Should Be Eating Now For Flavor, Health, and the Environment (Slideshow)

So now that we've covered why eating more fish is good for your taste buds, your body, and the planet, you might be asking yourself: Why should I being eating fish now?

Believe it or not, the consumption of fish is impacting our environment, too, and the more we make smart choices about what fish to eat at a given time, the more we’ll be helping our planet survive.

How do fish have an impact on the environment? Like beef, fish make an impact in several ways, as Bowman explained to The Daily Meal, and there are a lot of different ways to think about making sustainable choices when consuming fish.

The first problem to consider is how we’re destroying entire ecosystems within our oceans’ waters. An example is with net fishing, most commonly used with 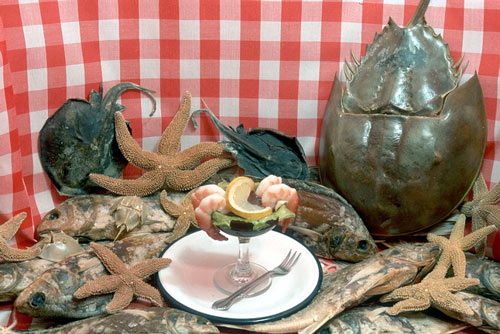 shrimp, which delivers multiple blows to our oceans’ habitats. The nets are large and invasive; destroying ecosystems that don’t deserve to be destroyed and collecting more than we need, an issue she defines as a "bycatch." Nothing is more evocative of this bycatch issue than a shrimp cocktail display the program has used to demonstrate what else is being pulled in when we go shrimping (photo right). There’s also the practice of fishing in breeding grounds, because as Bowman explains it, "When these fishermen head out every day, they want to get the job done quickly and efficiently," and oftentimes that means disrupting large masses of fish in places where they gather to mate, making it harder for them to reproduce and thrive.(Photo courtesy of Monterey Bay Aquarium/Randy Wilder).

Along these lines, and one of our biggest problems, according to Bowman, are our less-than-conservative measures of fishing that are causing us to deplete entire populations of fish. "We take 50 million tons of fish when we should be taking 20," says Bowman. Along these lines, we have a tendency to eat fish that are higher up on the food chain, which are slow-growing, long-living species. Fish like swordfish, shark, and tuna are the "tigers of the aquatic world," she says, and by overfishing them, we’re making them go extinct. Another way of putting it is thinking of cod as the elephants of the ocean, and less favorable fish but better choices, like sardines, as the chicken. Cod used to be a 6-foot-long, 240-pound fish, and they’re now reduced to measuring 2 feet long and weighing less than 100 pounds.

Our fish farming practices are an issue as well, and one that most closely relates to the problems with cattle production. When fish are farmed in small, overcrowded tanks, they excrete large amount of toxins into the water and air, and are therefore harming the environment as well as each other, forcing these fish farming corporations to feed them drugs and antibiotics, which further affects their carbon dioxide omission, as well as our health.

As you can see, our choices about what fish to eat are not ones that should be just based on taste or preference, but ones that consider our Earth, as well. Bowman and her colleagues are looking to change people’s understanding of fish and how to consume it, which is evident in the program’s mission statement, which states that it aims to help "consumers and businesses make choices for healthy oceans."