America’s Best Fish and Chips for 2014

There are few foods more satisfying than fish and chips.

On the surface, fish and chips sounds like a pretty easy dish to make. You batter up a piece of fish and toss it into the deep fryer with some frozen French fries, what could be easier? Well, it’s actually a rather tricky dish to get right, because when it’s great it’s great, and when it’s bad it’s really bad. At these 10 restaurants, their fish and chips aren’t just great, they’re the best in the country.

Deep-fried fish was first introduced in Britain by Jewish refugees from Portugal and Spain in the 1500s. In 1860, Joseph Malin opened the first fish and chip shop, in Oldham, Manchester. As a combination of mass trawl fishing in the North Sea and the construction of railways connecting the ports to the major cities made fish cheap and readily available, it became a staple working-class food and by the end of the 1800s, chip shops, or chippers or chippys as they came to be known, were ubiquitous. From there the meal caught on in neighboring Scotland and Ireland, and then on to the United States.

The “fish” in fish and chips is generally cod or haddock, but other white fish like pollock, plaice, and skate aren’t uncommon, along with halibut, flounder, and tilapia in the U.S. It all comes down to what’s available, and many restaurants will let you choose from several options (be wary of a restaurant that can’t tell you what kind of fish goes into it). Batter is generally just flour and water, with some baking soda and vinegar added, but some restaurants replace the water with beer or milk. As for the chips, British fries are usually thicker than their American counterpart, with a super-crunchy exterior and light and fluffy interior. The whole platter is usually served with a wedge of lemon and some malt vinegar on the side, and in the U.S. you’ll usually find tartar sauce on the side as well. A popular side dish is mushy peas, which is exactly what it sounds like: peas cooked down until they’re mushy (it tastes better than it sounds).

It wasn’t so long ago that you’d be hard-pressed to find better fish and chips in America than what’s offered at Long John Silver’s. Recently, however, some astoundingly delicious fish and chips have found their way onto menus at English-style pubs and seafood shacks alike, joining other classic institutions that have been serving the dish for years. We’ve incorporated many different types of restaurants, from all over the country, into our ranking, sticking with the criteria that the fish must be freshly-fried, made with high-quality local fish (preferably your choice of several options), and supremely crispy. The chips should also be super-crispy and perfectly complement the fish.

Read on to learn which 10 restaurants serve America’s best fish and chips. 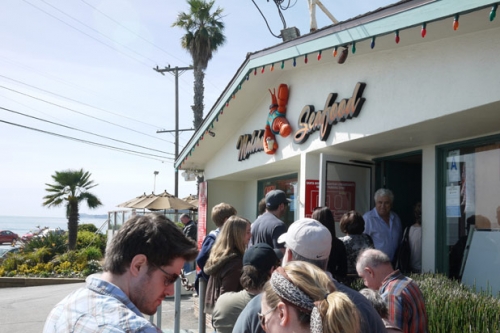 Located right on the water in Malibu, this BYOB patio café and fish market serves some of the area’s freshest fish and has become a beloved institution. More than 25 different varieties of fish are on offer, ranging from onaga to loup de mer, and while you can have your pick simply grilled, make sure you sample it fried as well (they serve it alongside “fries” instead of chips, but we’ll let that slide).  The traditional batter is light, super-crispy, and unobtrusive, and an afternoon spent here with a six-pack and an unobstructed view of the Pacific is worth the day trip from Los Angeles. 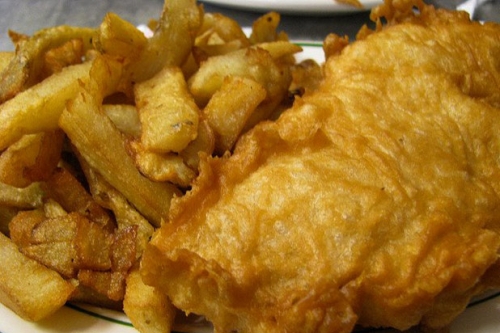 This spacious downtown Woonsocket institution has been going strong since 1922, when Yorkshire natives Harry and Ethel Sowden opened this waterfront eatery, and today it’s still in the family, with the fifth generation in training. The unique English-style batter recipe, which results in a slightly heavier crust around the fresh-caught pollock or cod, hasn’t changed since the day they opened, and the fries are hand-cut and pair perfectly with a shake of malt vinegar.

Click here to see the rest of the best fish and chips in America.